AMD’s Ryzen 5 2600x is one of the most recommended processors for mid-range gaming builds. In less than 200 bucks, you can find the best motherboard for Ryzen 5 2600x with bizarre performance and outstanding overclocking capabilities.

Ryzen 5 2600x is a great competitor for Intel’s i5 9600K, but Ryzen 5 series combined with a GPU provides superior performance and is worth the money. Most mid-range gamers use Ryzen because it comes factory unlocked, and it can be overclocked with a cheap motherboard. The motherboard recommendation is at least a B450 or X470 chipset option to enjoy this processor’s performance.

When you have hundreds of motherboards in front, it will be pretty hard to pick the best one, especially if you are a non-tech guy. We’ve handpicked the best motherboards for Ryzen 5 2600x to get the most out of your gaming computer. 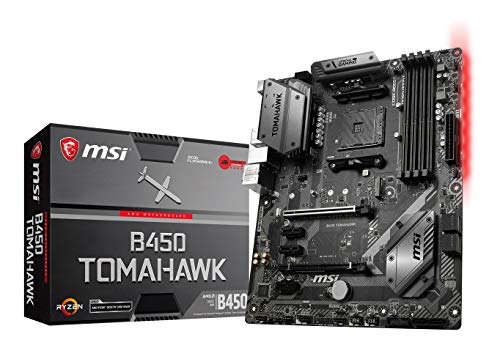 The MSI Tomahawk is one of the best gaming motherboards for the Ryzen 5 2600x, providing users outstanding overclocking performance and a great set of features.

These B450 chipset motherboards are specially designed for gamers who are on a tight budget. You can even upgrade to Ryzen 3000 series processors without changing the mainboard if you own this motherboard but might need a BIOS update.

When you compare it without B450 motherboards, you will find it much better to consider it for a Zen+ processor.

Regarding the design, the MSI Tomahawk comes with appealing looks. It follows the color scheme of its predecessor and has a black-colored base with some grey accents. In addition, the light gunmetal grey heatsinks on the VRM and chipsets give it a classy look.

The main sections of the board lack RGB lights, but there are many of them on the right side, which you can customize with any RGB lights software.

The RGB lights header is capable of supplying power to 12V strip lights. Also, it comes with an RGB lights controller, which is unfortunately not independently controllable but can produce various effects. The company focused on aesthetics, but they also worked on power and features, and Tomahawk motherboards are highly regarded for their excellent VRMs and cooling systems.

In addition to its four RAM slots, the MSI Tomahawk supports a total of 128 GB of memory, which is more than enough for a mid-range gaming setup. An M.2 socket and six SATA slots are available for storage expansion, but the M.2 lacks the heat spreader.

The only PCI-e 3.0 x16 slot is protected with Steel Slot armor to reduce the risk of damage from heavy graphics cards. While the rest of the PCI-e slots follow the PCI-e 2.0 interface, other add-in cards can also be installed.

Regarding the rear I/O panel’s connectivity ports, we have two USB 3.1 Gen2 ports (Type-A and Type-C), a couple of USB 3.1 Type-A ports, and a USB 2.0 port. In addition to USB, there is a DVI-D port and an HDMI 1.4 port, one PS/2 combo port, and the Realtek RTL8111H Ethernet controller. There’s also a BIOS Flashback button that allows you to update your bios without a processor, memory, or video card. 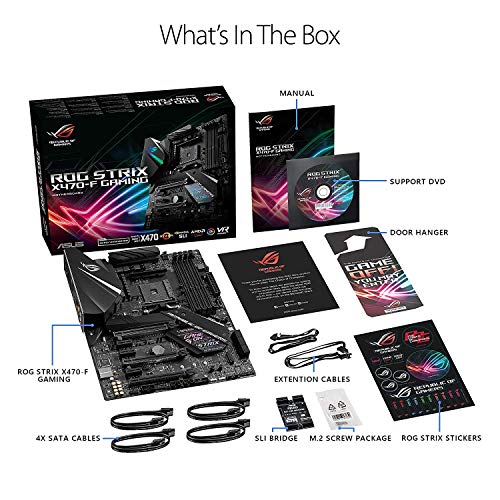 There are two X470 Rog Series motherboards from ASUS, where the x470-F is a fine balance between the standard and premium, while the x470-E is built for enthusiasts.

The Ryzen 5 2600x processor is under $200, so we don’t recommend spending more than $200 on just a motherboard. In contrast, if you’re a hardcore gamer, you can choose the Asus X470-E, which offers excellent performance with maximum overclocking potential.

Concerning the ROG Strix X470-F, it also gives a solid performance and has excellent aesthetics. In addition to looking great, the Cyber-Text pattern is very satisfying. The I/O Armor Plate logo looks very cool, and it has RGB lighting that you can control with the software.

The memory slots and storage on this motherboard are excellent. The DIMM slots that support 128 GB DDR4 memory look like standard slots and are not armored, which is disappointing. In addition, you will find a couple of fan headers and a Type-C front panel header.

In addition to memory, ROG X470-F features excellent connectivity options for storage. On the left side of the motherboard, there are six SATA ports.

There are also two M.2 sockets on the board for those who need the fastest storage. One of them comes with its dedicated heatsink while the other one lacks it. 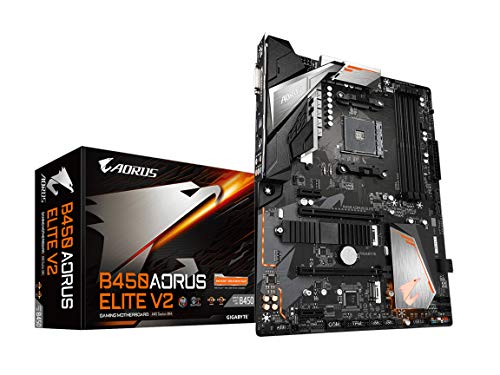 Aorus’ PCB features a black finish and a white logo, which looks stunning. On the heatsinks, circuits, and VRMs, there is a nice-looking orange color.

The B450 Aorus Elite offers many features that other motherboards in this price range do not. You have a dedicated thermal heat spreader over the M.2 socket, but not the secondary one. Furthermore, the Aorus RGB logo appears on the heat sinks above the SouthBridge, which can be controlled via software.

I like the cover over the rear I/O shield, which covers some of the VRM. Gigabyte’s VRM performance and cooling are very similar to that of other B450 motherboards.

Regarding the connectivity options, we have four DIMM slots that can support 64GB of DDR4 3600MHz memory, which is more than enough for a mid-range gaming build. Additionally, we have RGB headers to connect either a 5V RGB strip light or a 12V RGB strip light. As for storage, we have six SATA connectors and two M.2 sockets along with the PCIe slots. There is one PCIe 3.0 x16 slot for the graphics card and two PCIe 2.0 x1 slots. You can also add more graphics cards by using the PCIe 2.0 x4 expansion slot.

On the rear I/O panel, the Gigabyte B450 Aurous Elite has four USB 3.1 Gen1 ports and four USB 2.0 ports. No USB Type-C port is available, but that’s ok since very few devices use USB Type-C ports. We have an HDMI 1.4 socket that supports 4k at 60Hz. Additionally, there is a DVI port that supports a 1920×1200 resolution display. Thus, that’s a fully-featured motherboard with great aesthetics, lots of features, and plenty of power. 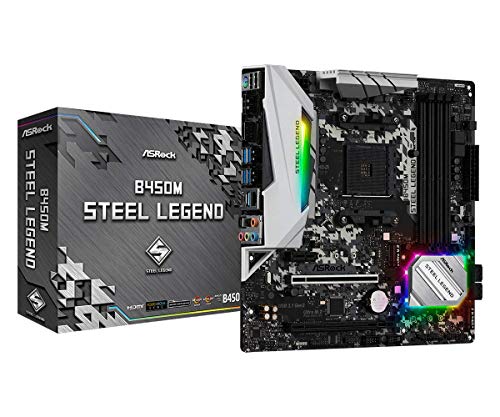 The Steel Legend series from ASRock is a highly regarded motherboard with regards to looks and durability. ASRock’s Steel Legend series comes with the most demanding specs and features to give the user a solid performance. ASRock’s micro-ATX B450 motherboard provides the best quality and a good amount of features at an exceptionally low price tag.

The B450M fulfills all requirements in its design, so it’s a truly enthusiast-oriented motherboard. The build, design, and colors are incredible. This beautiful design features a black, white, and camouflage-style pattern. With the stainless steel finish and the RGB light, your computer will look like a beast. Due to its small size, it may lack some features, such as fewer storage slots and one PCIe x16 slot. Then again, that’s more than enough for most mid-range builds.

Earlier, we mentioned that the B450M has one PCI-e X16 slot. A PCI-e x4 expansion slot allows you to install more than one graphics card at once. Additionally, there is a PCIe x1 slot and other PCIe slots.

The DIMM slots are similar to those on the motherboards we listed above. Using DDR4 3533+ (overclocked) memory in 4 DIMM slots, you have 64GB of memory available. Additionally, there are quite a few options for storage space! The B450M comes with four SATA slots and two M.2 sockets for fast storage devices.

Rear I/O offers a wide range of connectivity options. There are six USB 3.1 Gen ports, two USB 3.1 Gen2 ports (Type-A and Type-C), and a PS/2 combo port. You have an HDMI Port supporting 4K at 60Hz, one DisplayPort 1.2, and an optical SPDIF out port. ASRock B450M is the best Micro-ATX motherboard for mid-range Ryzen 5 2600X builds due to its outstanding build quality, performance, and stability. 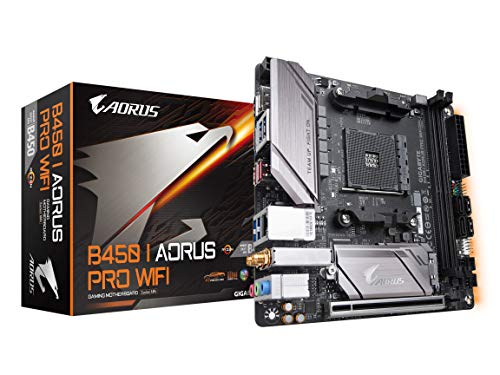 Most vendors don’t provide excellent quality and aesthetics when it comes to mini-ITX builds and the B450 chipset. Gigabyte has offered a motherboard that is far superior to other mini-ITX motherboards on the market. The B450I features a built-in Wi-Fi card, making it the best-looking B450 motherboard currently available at such a low price. With small sizes, there must be some quality compromises, but we have to accept them.

Gigabyte’s B450I features a 4+2 phase power supply with smaller heatsinks than other boards on the market. Adding an overclocked Ryzen processor to a motherboard will result in pretty high temperatures. The PCB has a black finish, and the heatsinks have a stainless steel finish. There are weaker heatsinks over the VRM, but it still performs well.

Due to its smaller size, the Gigabyte B450I has minimal connectivity options. There is only one M.2 socket under the heatsink. There is also a single PCIe X16 slot, so you can only install one graphics card. You can install two 16GB DIMMs for a total of 32GB of RAM onboard. There are four SATA connectors for storage. Because of its mini-ITX form factor, there isn’t much to explain about this motherboard.

On the rear I/O panel, there’s nothing unbalanced here. There are two USB 3.1 Gen2 ports, two USB 3.1 Gen1 ports, and two USB 2.0 Type-A ports. Two HDMI 1.4 ports and a DisplayPort are provided for display. The audio quality on this thing isn’t excellent.

Although this build might save you some space due to its smaller size, it will never be the best gaming build. You can, however, use this motherboard for midrange gaming.

So here are some of the faqs that I have got through my email and in the comment section.

If you want to overclock, you’ll need a motherboard with a good VRM setup that can deliver enough voltage to the CPU to reach its limits. As well as providing the best cooling system, you must also avoid burning your processor. After that, you can find a lot of software on the internet which can push your processor to the limit. According to our experience, the 2nd Generation Ryzen CPUs do not provide good overclocking results.

Ryzen 5 2600x is a mid-range CPU for gaming builds. To make your processor work perfectly, you can get a motherboard with a B450 or X470 chipset. The more you invest in the mainboard, the more connectivity and storage you’ll have, and premium motherboards also offer excellent overclocking performance.

Which Motherboard Would Be Best for Ryzen 5 2600x?

A motherboard is selected based on a variety of factors. We’ve tested a few motherboards and ranked them in our list, so take a look. If you’re short on time, our team selected the MSI Tomahawk as the best motherboard in both aesthetics and performance.